I am from India, a country of rich diversity and varied cultures where people speak 22 languages (Government of India-Ministry of Human Resource Development, 2016, April 16) and belong to all possible faiths (Census of India: Religion, 2001). Canada is a multicultural champion and has adopted a multicultural policy since the 1970s Brosseau & Dewing (2018). In many ways, Canada and India are very similar: both are multi-cultural, both are democracies with a similar organization of governments, and the same government outlook on diversity. However, even though India and Canada have many similarities, there are considerable differences in the cultures of these two countries.

From my perspective, I can observe the drastic differences between the two cultures. In India, there is a general apathy towards the effective use and maintenance of public resources like roads, buses, trains, and parks. In comparison, public resources in Canada are used and maintained more effectively. One of the most significant differences between India and Canada is the perception of rules and regulations. In Canada, people respect and obey rules like driving in speed limits, walking on the sidewalk, and countless more simple things in day-to-day life. In India, chaos reigns in almost all aspects of public life, be that road or public spaces like parks. In India, neither the public nor the civil servants care about the rules, they all look for ways to bypass the system.

Hofstede (1999) defines culture as the “programming of the mind”. According to Hofstede, culture is an acquired behavior; something people accumulate over time as a function of their contextual and geographical realities. This programming defines and distinguishes one set of people from another. A lot of immigrants acquire behaviors of their host countries, such as speaking the host country language with an impeccable accent, building a taste for local cuisine, and adapting to the life of their adopted homeland. There are six dimensions of culture at play Hoefstede (2011) in a usual business context. Let’s see how India and Canada compare on these six cultural dimensions: 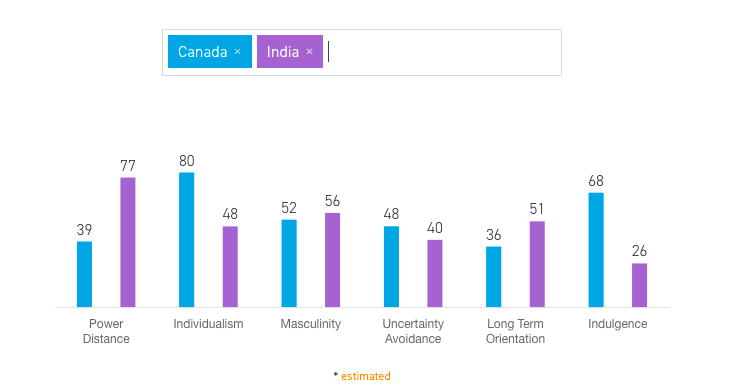 It is easily visible in the above chart that India and Canada are culturally quite different when tested on the Hofstede framework. Let us discuss how each of these dimensions reflects the cultural differences in the two countries. Power distance Hofstede et al. (2010) represents the degree to which people with less power accept the fact that power is distributed unequally. People with less power in Canada believe that power is fairly distributed in comparison to the same kind of people in India. According to Khatri (2009), people in high power distance places like India are not too keen to participate in the decision-making process and will let their bosses make the decisions.

Individualism dimension Hofstede et al. (2010) indicates the extent to which people in the community depend on each other. A higher score on this index means a community is loosely coupled. People from India are used to support from people in their community, which is not as prevalent in Canada. The masculinity dimension indicates the dominant value system of a society Hofstede et al. (2010). A high score on the masculinity index suggests that a community is highly goal-oriented and competitive, whereas a low score indicates a society that values the quality of life. India and Canada are both moderately masculine and are not overly competitive societies.

The uncertainty avoidance Hofstede et al. (2010) dimension points to the ability of a culture to accept a change or be open to new ideas. A higher uncertainty avoidance index indicates a society that doesn’t like change and is rooted in its thinking. Both Canada and India are open to ambiguity in life and are open to new ideas. The long-term orientation index points to the propensity of a society to maintain links while dealing with a situation Hofstede et al. (2010). Canada scores low on this index, indicating that as a society, it is rooted in traditions and doesn’t save much for the future. Whereas, India’s score suggests that it is a society that values thrift and is more practical in their approach to life. This is apparent in the Indian way of doing things called Jugaad, a Hindi word that translates to frugal innovation Radjou et al. (2010). It is a part of the lifestyle in India where people from all walks of life hack their way through problems that arise due to the lack of resources.

The indulgence index points Hofstede et al. (2010) to the propensity of society to act on their impulses and desires. A high score on this index indicates an indulgent community where people are likely have a good time. India scores low on this index, showing a high level of restraint in the society to control its desires. Whereas Canada scores high on this index indicating that as a society they like to have fun and can be categorized as indulgent.

Let us assume we have an Indian manager working in Canada and see how Hofstede dimension scores will help us in dissecting how she deals with workplace scenarios.

Despite high-level similarities between the government structures and policies, Canada and India are culturally very different countries. This difference is apparent not only in day-to-day life but also in the inherent cultural values of the people. These differences are probably the reason why Indian immigrants find it hard to land a job in their chosen field in Canada.

Hofstede, G. (1999). The business of international business is culture. The Internationalization of the Firm: A Reader, 381-93.